You Taught us to be Human, Now a Martyr too!

It was indeed a struggle to carry the flower-decked deceased body inside the chapel of the Seminary, where Fr KJ Thomas or simply Fr KJ as he is known by all and sundry must have been the main celebrant on innumerable occasions. The simple and straight message that was painted on a plain white paper and kept near the mortal head of Fr KJ facing the altar was touching: ”Oh Dear Father, we miss you forever. You taught us every time, How to be Human; Finally, How to be a Martyr too.”
When the gathered crowd of the faithful had found themselves seating place or standing elbow-room, the Archbishop of Bangalore Dr Bernard Moras, delivered a touching and heart-warming eulogy to Fr KJ. The Archbishop first read out the condolence messages that he had received from Vatican’s Apostolic Nuncio to India by Archbishop Salavatore Pennacchio, Oswald Cardinal Gracias, President of CBCI and CCBI and Archbishop of Mumbai, Moran Mor Baselios Cardinal Cleemis, Major Archbishop of Syro-Malankara Catholic Church, Mar George Cardinal Alencherry, Major Archbishop of Ernakulam-Angamaly Syro-Malabar Church and Telesphore Cardinal Placidus Toppo, Archbishop of Ranchi.
Did Not Believe Fr KJ Is Dead: Archbishop Moras

”At this precious time of the Year as we start the Easter Octave, this is not an occasion that I wished to meet you here in St Peter’s Pontifical Seminary,” began the Archbishop Dr Moras, saying: ”With a heavy heart, deep shock and profound sorrow, I wish to express my sincerest sentiments of condolences and sympathies: First of all to all the seminarians of the Seminary, staff and domestic helpers, beloved family members, board member bishops, the priests, religious and people of Ooty diocese.”
”When I heard the shocking news yesterday (Monday April 1) morning around 7.30 am, I could not believe my ears and did not want it to be true as well because of the gruesome and inhuman way in which the murder has taken place,” he said.
An Erudite Scholar

Dr Moras mentioned that Fr Thomas Kochupuryil was born on May 13, 1951 at Ettumanoor, near Kottayam, Kerala. After his high school studies in his native place, he joined the Diocese of Ooty as a minor seminarian due to the fraternal and vocational influence of his uncle, who is a priest still alive. He did his major seminary studies and had formation at St Peter’s Pontifical Seminary/Institute in Bangalore. He was a studious and illustrious student as we hear from his professors, who vouch for it. He was ordained a priest for the Diocese of Ooty on May 14, 1980. Subsequently, he completed his Master’s Degree in History from Mysore University and another Master’s degree in Political Science from Madras University. Later, he completed his M.Ed. from Madura Kamaraj University. He served the Ooty Diocese for about 8 years as Assistant Parish Priest and school principal.
Having recognized the caliber, character, capacity and piety of Fr Thomas, the Board of St Peter’s Seminary selected and appointed him as a staff, formator and lecturer starting with the year 1988. He was sent for higher studies in Rome in Systematic Theology and came with a Doctorate with flying colours in 1993 from Urbaniana University.
The Board of Bishops, who had observed his simplicity, honesty, hard work, dedication and the spirit of austerity, appointed Fr KJ as Procurator for two terms of five years from 1994. Concurrently, he also held the office of the Department of Systematic Theology for many years with distinction. He was installed as the President of the St Peter’s Pontifical Institute in 2009 and renominated to the same post in 2009 and named as the Rector of St Peter’s Pontifical Major Seminary. He has served the seminary with ”utmost care, devotion and dedication.”

”As an erudite and enlightened professor, he has taught theology to the students but also published several theological articles and books. To this date, as on record, he has always been a kind father to whomever he came across, a faithful, systematic theologian, an able financial administrator, a friend to all and enemy to none. He was a guide, philosopher to all those who sought his direction and counseling,” the Archbishop said.
Indelible Mark in Annals of Seminary

”Fr KJ Thomas, we have loved your presence, enjoyed your conversations and it is a pleasure to listen to your appropriate stories and remarkable sense of humour with wit and wisdom, serious and sincerity,” Dr Moras said with a voice choking with emotion, adding: ”The hallmark of your personality will make an indelible mark in the annals of St Peter’s Pontifical Seminary and Institute. You had an indomitable spirit for hard work, study, prayer and service. We will miss you but ever love you. May your Soul Rest in Peace.”
Later, Archbishop Dr Moras read out select messages from near and dear ones of Fr KJ Thomas, especially from his nephew Jaison from Tampa, Florida, USA, Fr Chris Vimalraj, Rome, Irudayaselvam, Taipei, Taiwan, Sr Mary Jacob, Bagalkot, Fr Siby, Shillong, Dr Mohan Prabhu, Ottawa, Canada and Fr Franklin D’Souza, CBCI Office for Youth, ICYM, New Delhi.
A Role Model for Budding Priests

Dharmapuri Diocese Bishop Lawrence Pais said Fr KJ was a simple soul and a soft-spoken person who had never hurt anyone in his life. It is ironical that he met with a tragic end, who least deserved it. He was a very humble and compassionate priest and had inspired hundreds of seminarians as a role model.
”Fr KJ Thomas, the youngest child among five children including two boys and three sisters, was a loving person and died a martyr’s death in the service of the church. His affable manners, soft and mild personality filled with love, sincerity, dedication and honesty were rare qualities of an extra-ordinary human being. He had provided spiritual guidance and sustenance of many seminarians,” described the Ootacamund Bishop Amal Raj.
BJP, Congress MLAs Among Leaders Paying Homage

The other Bishops, Vicar Generals of Bangalore and Dharmapuri and Ootacamund Dioceses as well as the President of St Peter’s Institute Dr Rayappan were among the many speakers, who paid homage to Fr KJ Thomas.
The hearse containing the mortal body of Fr KJ Thomas was taken in an air-conditioned bus to Kottayam diocese around 11 am after all priests, sisters, lay people as well as political leaders, including Malleswaram BJP MLA Dr Ashwathanarayan, Mahalaxipuram Congress MLA N L Narendra Babu and local Congress Corporators and leaders of various Catholic and Christian organizations including T J Abraham, a prominent Christian lay leader, paid their tributes to the deceased priest.
Congress MLA K J George and Anglo-Indian ex-MLA Ivan Nigli, who had arrived at St Peter’s Seminary on Monday morning soon after hearing news of Fr KJ’s murder, had stayed at the seminary and held consultations with senior police officials and Archbishop Dr Bernard Moras till the body of Fr KJ was shifted to M S Ramaiah Hospital in the afternoon for post-mortem. 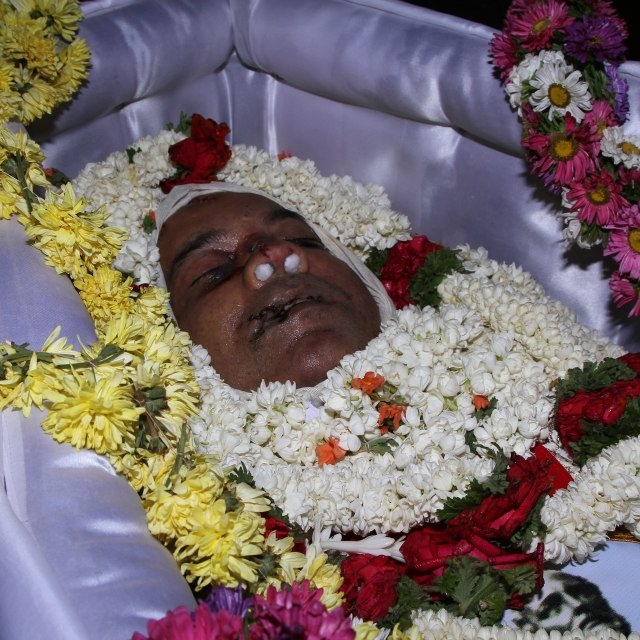 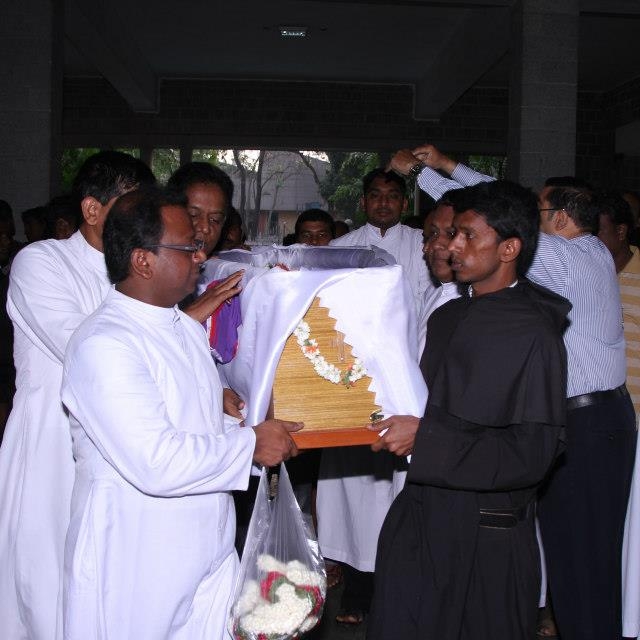 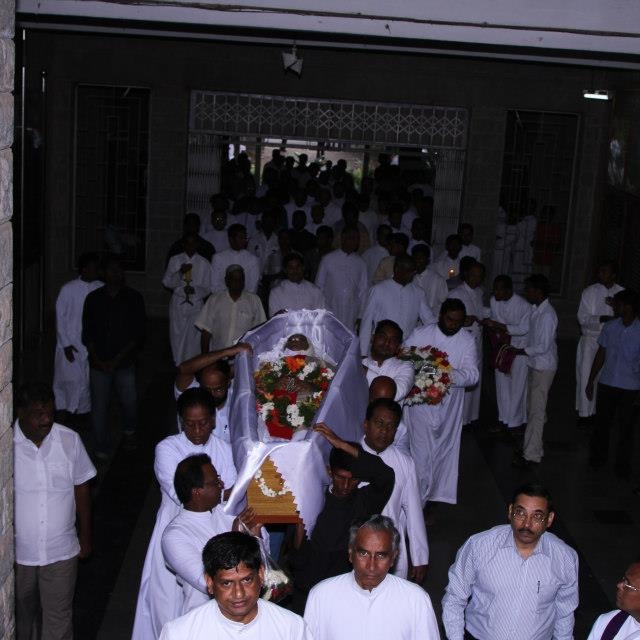 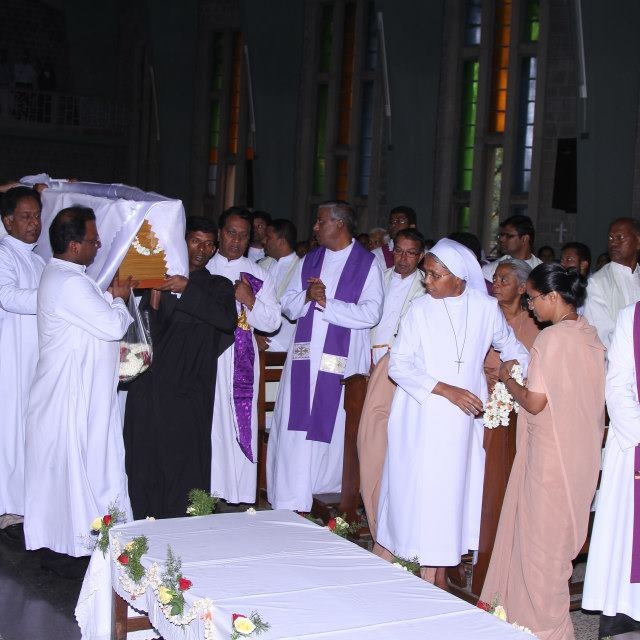 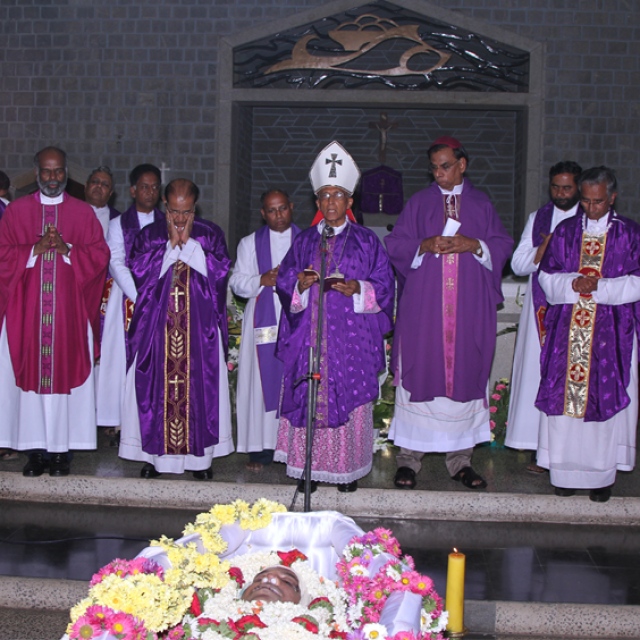 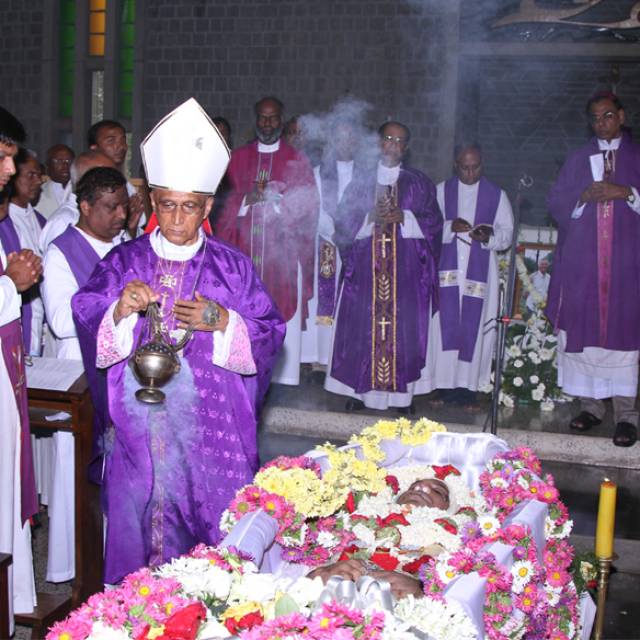 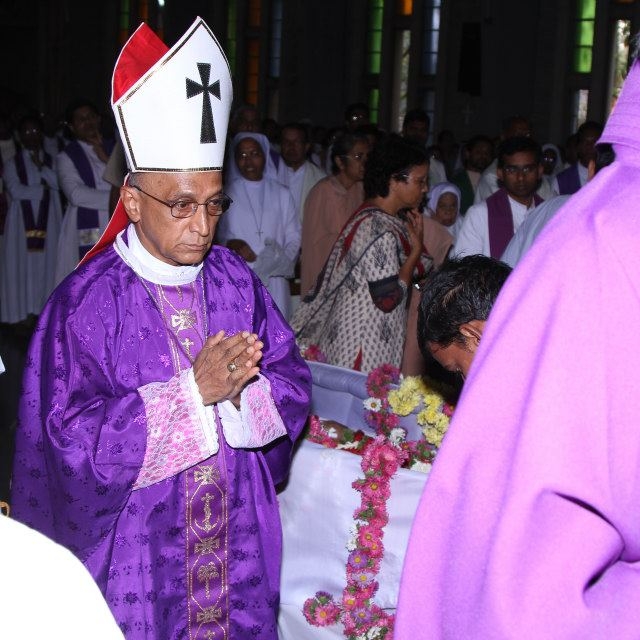 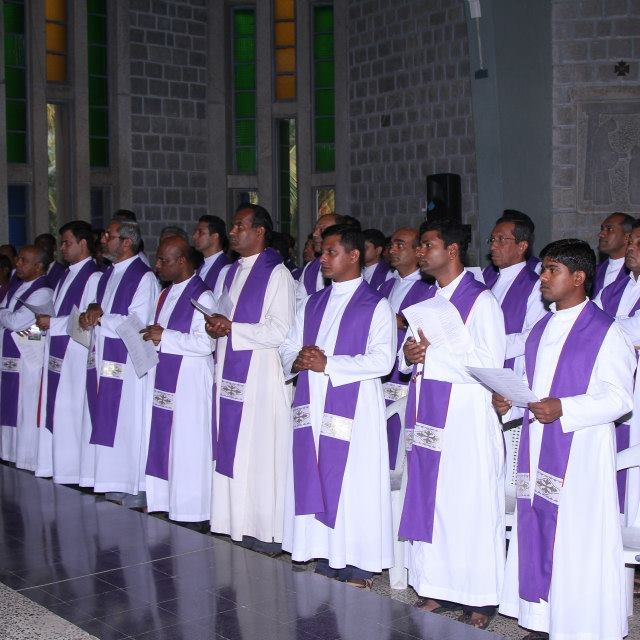 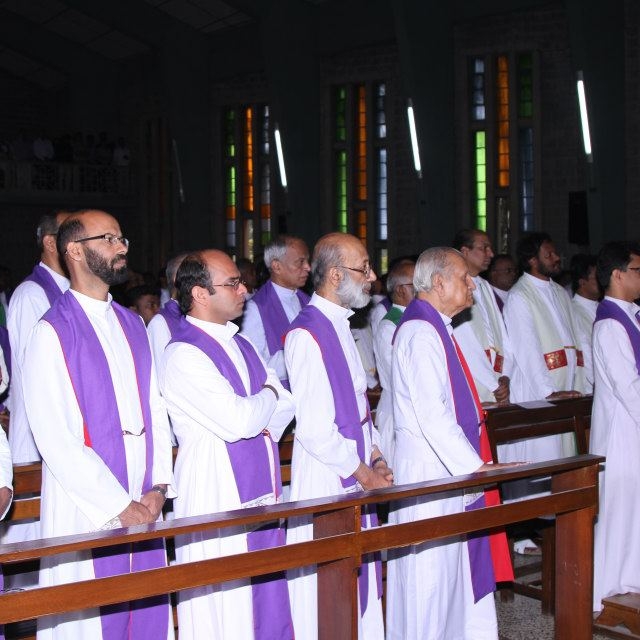 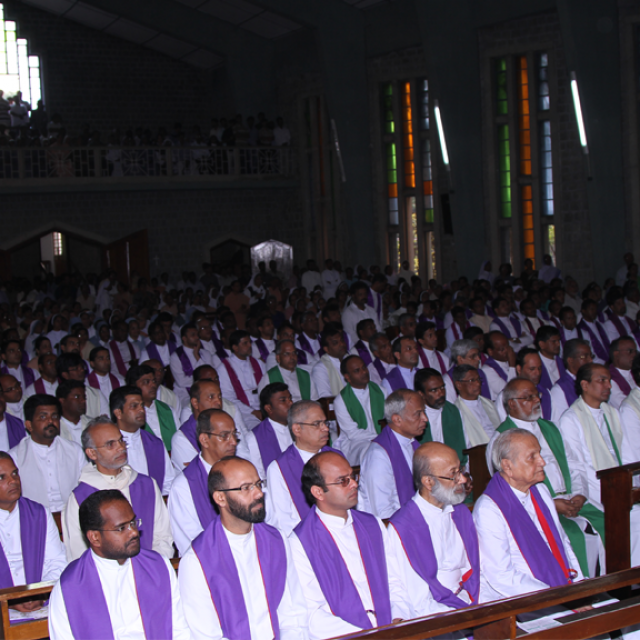 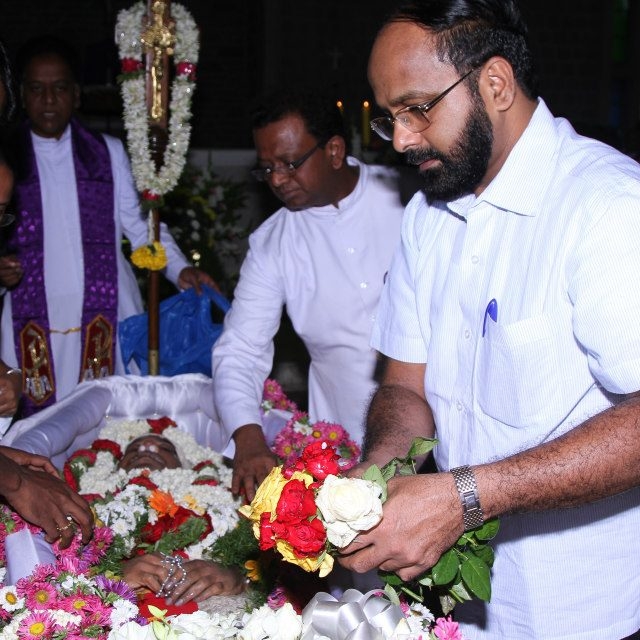 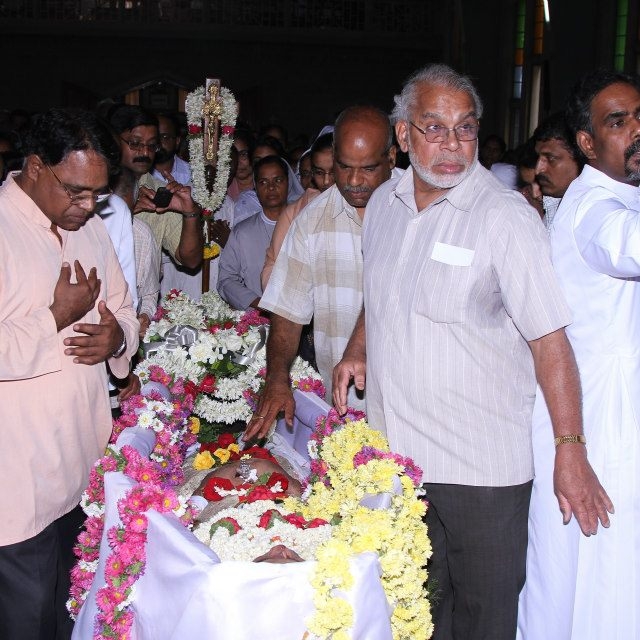 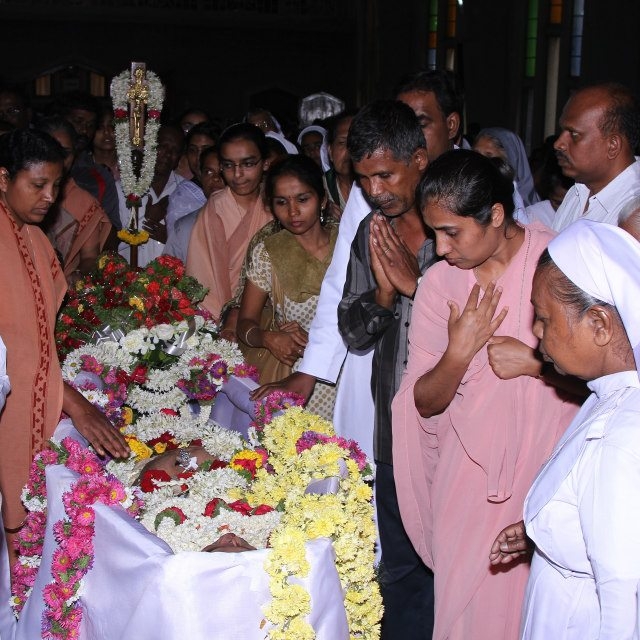 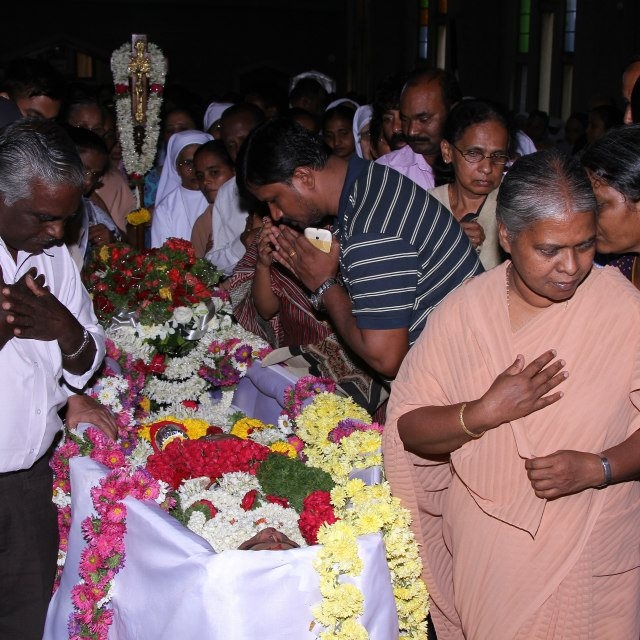 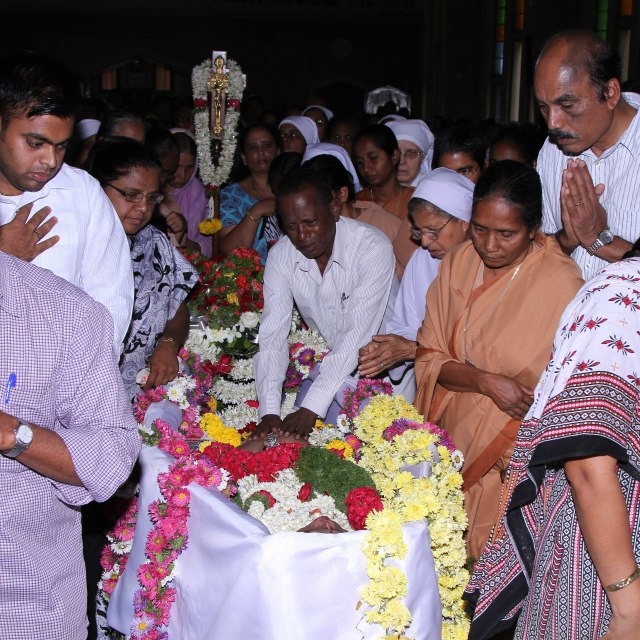 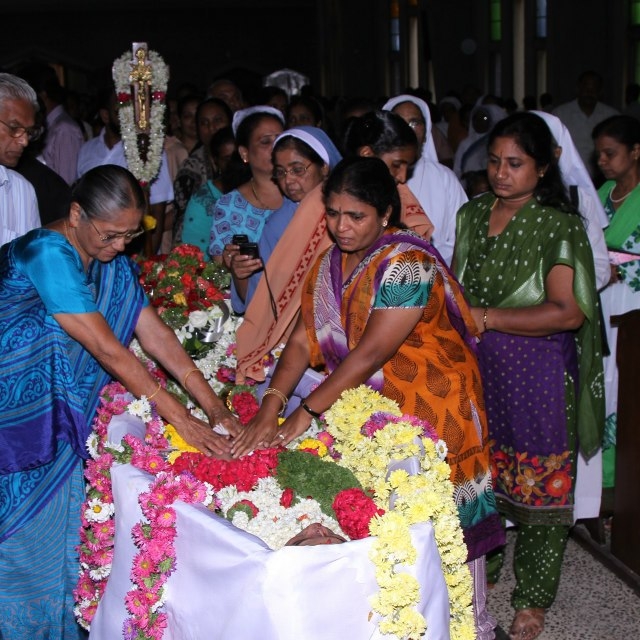 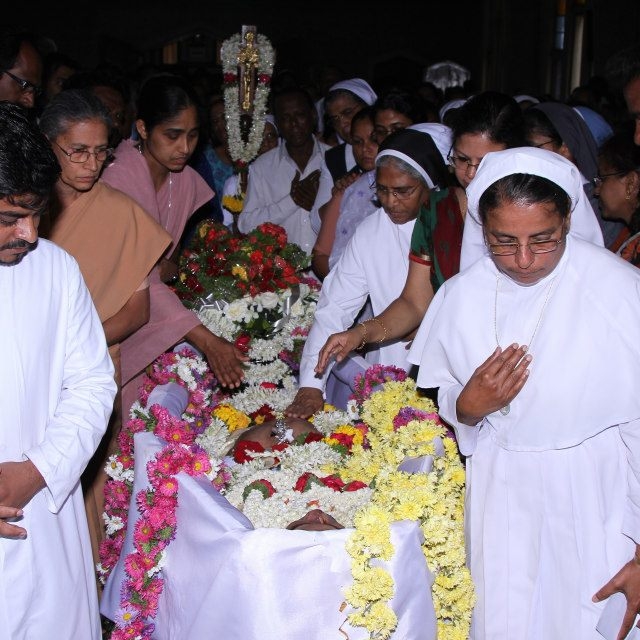 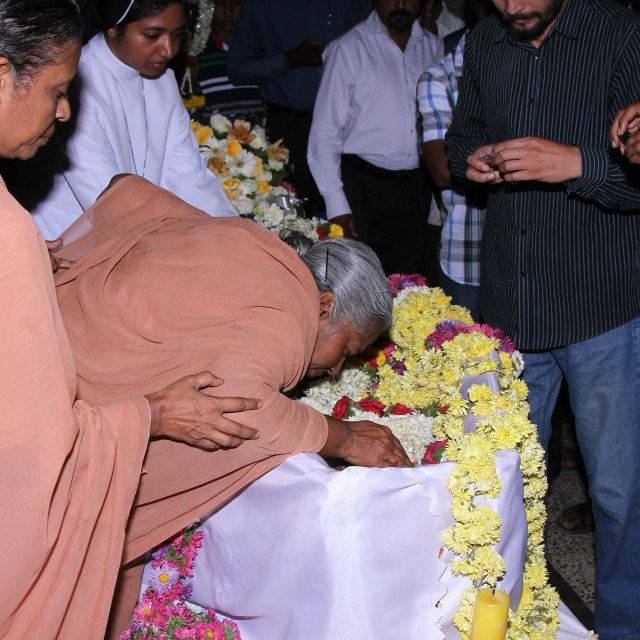 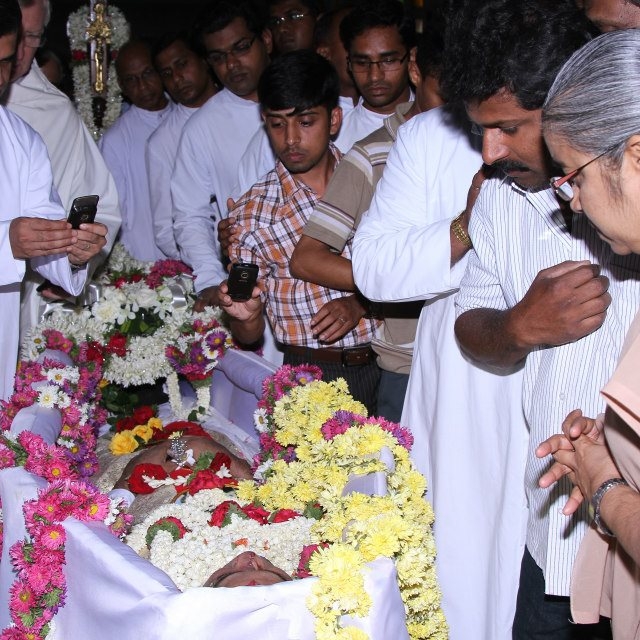 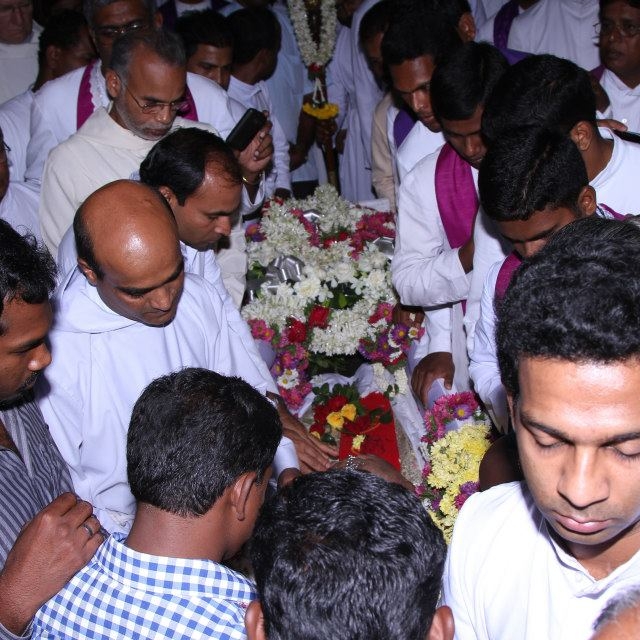 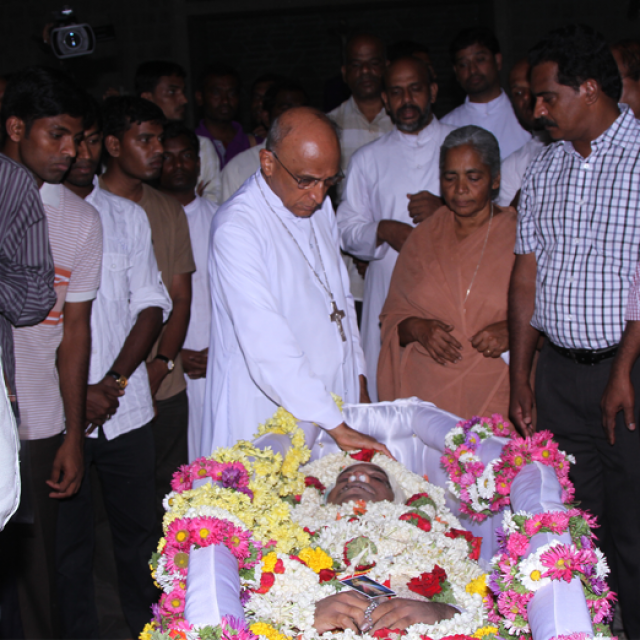 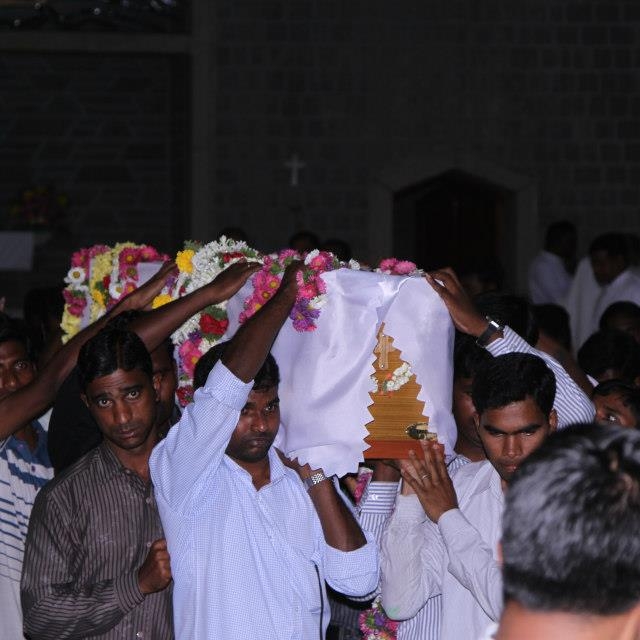 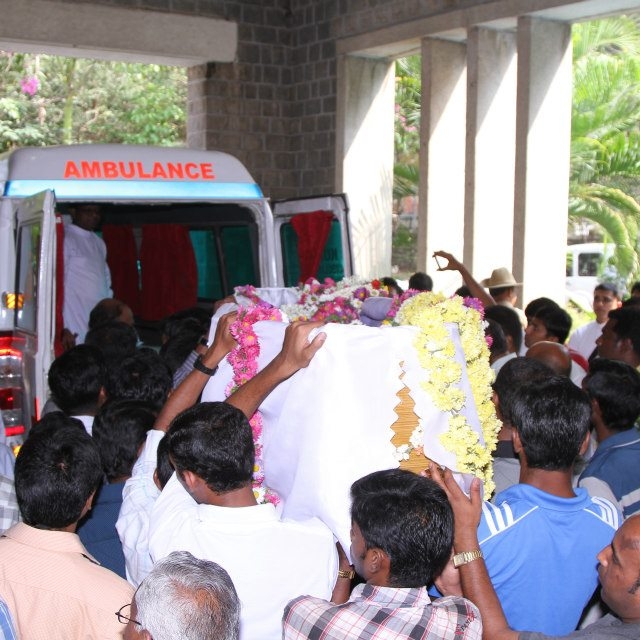